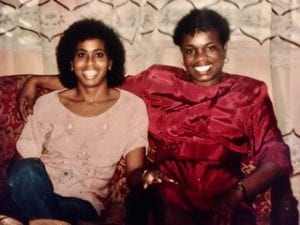 Marva is my cousin and I love her dearly. She is the oldest grandchild and I am the youngest grandchild of 15 grandchildren of our maternal grandparents. When I was born she was married with children. Marva is the synonym of fun. She is a true extrovert. Everybody knows her and she knows everybody, everybody loves her and wants to be around her. She is the life of every gathering, party or celebration. Growing-up, I loved being around her.

When Marva arrives to an event, you know she is in the house and the fun begins… okay. Her laughter fills the room and is contagious. And she has one of the most beautiful smiles. She is also a master cook and loves to entertain and she does it with utmost elegance and class. Her favorite word is “okay.” But she has her own way and style of saying it, you can’t help but smile. And she won’t hold back in telling you what’s on her mind. She is a one of a kind gem.

Marva’s story will inspire, encourage, motivate, uplift and empower people of all ages. In particular, immigrants, older women, divorced, single moms and dads, and people who feel it is too late to pursue and accomplish their goals. It’s never too late!!!

This is a story of determination and perseverance to succeed. Let’s get right to it…

Marva’s story, in her own words…

Divorced, Single-Mom, Immigrant… facing the Most Crucial Point in My Life

In July 1980, due to the changes in the work force brought about by the 1977 Panama Canal Treaty between the United States and Panama, I relocated with my daughter to Houston, Texas. I immigrated to the United States because I always wanted to have a college education and it was very difficult for a divorced woman with children to pursue any such thing.

All my siblings and three of my children were already living in the United States so I decided it was best for me to immigrate with my youngest child. During a visit to Austin, Texas, a friend persuaded us to remain in Central Texas. This was a most crucial point in my life since I not only had to make adjustments professionally, but personally and socially as well.

I handled the three situations well because I had a chance to consider the options in lifestyles and was able to reconstruct my life. As a single-mom, I raised my youngest child, who now has her Master’s degree and is well established in the computer science field.

I Accomplished My Goals… It’s never too late! 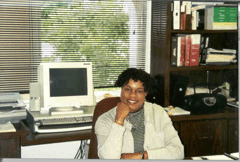 I spoke English and Spanish well because I attended the former Canal Zone Schools which taught in both languages. This ability made me an effective collaborator through my career. My ability to speak, read and write Spanish was critical because of the ever-growing diversity in the workforce and the community.

I worked as a full time employee with the City of Austin for over 18 years and at the same time as a part-time employee with the State of Texas Coordinating Board for over 10 years. When I worked for the City of Austin, I was given an opportunity to grow because of the visionary managers I worked with. I was able to articulate my administrative skills, develop as a human resources professional, and raise my consciousness about government.

In June 1988, The City of Austin’s Transportation and Public Service Department selected me as their representative for the University YWCA Outstanding Achievement Award. I was simply awed by the fact that in a department of over 500 employees, I was chosen to represent the Department. I was one of nineteen nominees in the Government Service category. Although I was not selected as an award recipient, I was listed in the Leader Luncheon Program and recognized publicly as one of Austin’s Outstanding Women. My family was very proud of me because we are all hard-working people but we go about the business of doing the best job possible very quietly.

I was 51 years old when I completed the course work for my Master of Arts degree. I was the first among my siblings to receive a graduate degree and I heard the pride in my mother’s voice when I told her I was graduating. She was ill at the time and was unable to attend my graduation. My mother passed the very next year, just nine months after this accomplishment. I feel an immense gratitude to this country for allowing me the opportunity to achieve these many milestones. But, I also credit my Panamanian foundation as being the cornerstone of my success.

In February 1998, I became the first Black Latina Human Resources Director of Deerfield Beach, Florida. I consider myself very fortunate to have worked, in my humble opinion, with two of the most progressive city managers in the country, the former City Manager of Austin, Texas and the City Manager of Deerfield Beach. These two individuals played a pivotal role in my professional career and advancement as a human resources director, and they were also the best mentors.

In February 2002, I was given a once in a lifetime opportunity to represent the City Of Deerfield Beach in a very prestigious program, “People to People Ambassador Programs.” I was part of  the U.S. delegation that visited South Africa. One of the main goals of this program is the role U.S. delegates play long after they return to the United States, in the transformation of South Africa, politically, economically, and socially.  One of the most memorable moments I had was during my visit to Robben Island, where Nelson Mandela    was kept prisoner for 18 or his 27 years in prison.

Retired and Giving Back 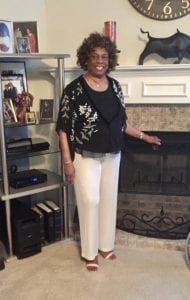 Having retired comfortably from the City of Deerfield Beach, Florida, in March 2009 (11 years of service), I now have the opportunity to work for the service of my community. It was my desire to continue to be a productive contributor where the essence of giving back played a greater role than monetary compensation.

I worked with the Killeen Independent School District as a substitute teacher for a while, then I worked for the City of Austin as a contractor in the Human Resources Department. My ability to connect with people served me well in both entities.

Currently, I was active at St. Christopher’s Episcopal Church and worked out every day at the Illuminate Gym in Harker Heights. I have developed a younger and new social circle through church activities and the gym. Because of the Corona Virus, both activities have been suspended for me at the present time. Therefore, my communication continues with the church and the gym through the Internet and zoom. I still enjoy traveling to different parts of the world to learn about other people and cultures. Whenever the country goes back to normal, I plan to resume some traveling.

Matriarch of the Family 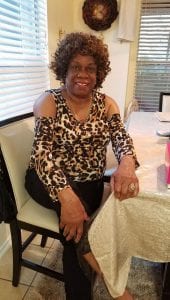 I have been blessed with four children, eight grandchildren and four great grandchildren. I thank God for allowing me to see this as I became the Matriarch of our family. With God, anything is possible.

Not Bad for a High School Dropout

Most importantly, I view the role of a woman in contemporary society as a very complex one, especially for an immigrant. It is obvious that I have prevailed despite the overwhelming social and economic barriers. Determination and perseverance have been the key factors to my success and strength. Not bad for a high school dropout… okay!

The “American Dream” is Real

I would like to say to every immigrant in this country that the “American Dream” is real if you are determined and can sacrifice. Getting an education in this country is a must. It pays off in the long run. I feel as an ultimate contribution, I can be the role model for the mature woman, who might think her life is over after divorce or death of a spouse.

My favorite quote is from Dr. Martin Luther King Jr., “The ultimate measure of a man is not where he stands in moments of comfort and convenience, but where he stands at times of challenge and controversy.”

“Jesus looked at them intently and said, “Humanly speaking, it is impossible. But with God everything is possible.”” Matthew 19:26 NLT

Please share my messages with family, friends and on your social medias. This message may not be for you but it is for somebody! Share! 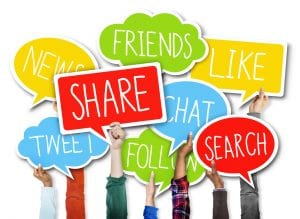